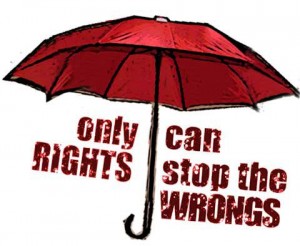 I am writing this submission to ask that my human rights as a legal, lawful sex worker be included in Federal Law in line with the Human Rights (Parliamentary Scrutiny) Act 2011 so that State Law cannot discriminate against me and remove my civil liberties like what happened recently in Queensland.

I live and work in Queensland and I have been in complete turmoil over the recent Amendment to the Anti-Discrimination Act, sec 106C, which now allows LEGAL DISCRIMINATION specifically against sex workers in the area of accommodation.  I was physically ill.  This came about because of a high profile anti-discrimination case in Queensland where the legal sex worker GK was found to have been discriminated against and WON.

Then we all were reminded of the actual depth of corruption and discrimination against sex workers in the Queensland government when our own Attorney-General Mr Jarrod Bleijie began a very public campaign, along with our Premier Mr Campbell-Newman and other Australian Christian Lobbyists to perpetrate the most heinous vilification and discrimination crime against sex workers.  Their political interference in this case is blatant, disrespectful and makes a mockery of existing laws.  What’s the point of human rights if they can simply be taken away at the whim of renegade politicians and rednecks whenever they feel threatened?  I think Queensland is corrupt.  The anti-discrimination case debacle is a prime example of why.

Despite 100% of the submissions received being against supporting legal discrimination, the Bill was still passed.  The arguments that were used in parliament to support legal discrimination, appeared to be based on misguided morals that did not seem to care about the rights of sex workers, arguing that the rights of hotelier and moteliers were more important.  They did not seem to care that there were already laws in place to protect hoteliers and moteliers from the usual disruptive guest in their establishment, because they were collectively discriminating on the basis that we are sex workers.  They were discriminating against a minority group based on negative stereotypical assumptions about sex workers that are simply fabrications.

The amount of potential harm this Bill can cause to sex workers, their partners, children, families and friends is HUGE.  How can this type of discrimination be allowed to occur in Australia in this day and age?  Since when is legal discrimination ever an option?  We may as well be living in Uganda where they are trying to pass the ‘Kill the Gays’ Bill at the moment.

I have experienced discrimination directly in my life as a sex worker.  I have been evicted from my leased accommodation, physically locked out of my carpark, my gate codes changed so I couldn’t get in.  I have had money stolen by real estate agents withholding part of my rent for no reason other than because I am a sex worker.

I used to play Roller Derby.  I was outed as a sex worker by someone to my team and I was shunned by them.  I was targeted by them on the flat track.  I was not included in social events.  I was segregated and ostracised.  I joined roller derby to feel more empowered and to actively participate in the community.  I was met with stigmatisation and marginalisation, both direct and indirect discrimination.

My self esteem plummeted.  I began to feel depressed.  I withdrew into my apartment and avoided contact with the outside world.  I generally felt bad about myself and it took me a long time before I could pick myself up and move on.

I pay tax.  I work within the Law.  I respect myself, my colleagues and my clients.  I would like to be shown some respect by the Australian government in Federal Law so that my faith in Australia signing up to international Human Rights Constitutions is not thrown back in my face.  I want to know that my Federal government is taking the recommendations of the United Nations reports about sex workers seriously.

Sex workers are real people, with real lives, with real families, with real children, with real friends.  We are EVERYWHERE in society but most of the time you don’t even know we are there.