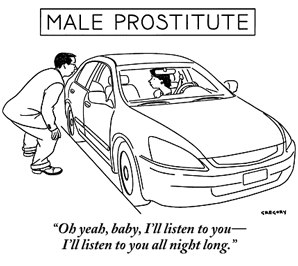 Again, another shoddy attempt at journalism.  Poorly written and bia’s.  The Morning Bulletin published an article in Rockhampton titled ‘Motels not happy about hookers’, dated 18th November, 2011 by Kerri-Anne Mesner.  In this article I am offended by the language that has been used to refer to legal sex workers and the total lack of consultation with sex worker organisations, such as RESPECT Inc.

The derogatory word ‘prostitute’ has been used eight times, and the word ‘hooker’ twice, including in the title.  The correct title ‘legal sex workers’ has not been used at all.  There is also a lack of counter-argument from sex workers in the article.  I have no doubt in my mind that Kerri-Anne Mesner made little or no attempt to consult with sex worker organisations for comments.  If she did, I expect she would have sent an email at 4.45pm on a Friday afternoon, when most people have already left for the weekend.

It doesn’t take a genius to see the obvious bias in the article.  Unfortunately, a lot of Australians are ignorant of the arguments for or against sex workers and rely on the media for facts. Sadly, media articles like this one do more harm than good and are no more than inflammatory.  Journalists need to be educated about how to write and research their stories and at the very least, have their stories read by an editor to ensure high reporting standards are maintained.  Kerri-Anne Mesner’s article is embarrassing and insulting to the general public who are educated who can read between the lines.  I feel I have to fill in some of the gaps in order to develop the story into one worth reading.

It is important to add that the recent Queensland Civil and Administrative Tribunal (QCAT) decision ruling against the legal sex worker known as GK in favour of the owners of the Drovers Rest Motel in Moranbah, is being appealed.  It is highly likely to be overturned and bought in line with current anti-discrimination laws and modern business practice.  Unfortunately people in positions of power are also human and prone to letting their own personal bias interfere with ethical decision-making, as is evident in this particular ruling.

Following on from this, is the weak interpretation of the Liquor Licensing Act that QCAT based their decision on.  In my opinion, if it is all of a sudden found to be illegal to operate a business from your motel room, which has a mini bar, in a hotel/motel that holds a liquor license, then wouldn’t that also apply to all the other businessmen and woman who use hotels and motel’s?  Consider ‘business’ conferences conducted for all sorts of businesses across Australia where alcohol is served or available.

The assertion that lawful sex workers are now moving into unlicensed premises is a misnomer.  We have always been there.  The comment by yet another motel owner is blatant evidence that he has been practising discrimination against lawful sex workers for at least four years by ‘turfing them out’.  How has he been able to get away with this illegal behaviour?  The idea that there are also legal sex workers who are male or transgender seems to completely baffle the owners.  They  appear ignorant that the sex industry is not a woman only service provider.  I would like to know how they ‘discovered’ how much money the male sex worker was earning?  I can only assume he had been stalked.  What disgusting language to refer to a legal sex worker as a ‘male-on-male’!

Further more, I would like to know how they can tell the difference between one legal sex worker and another?  How do they know which lawful sex workers will behave questionably?  My guess is that they don’t and they have made an unlawful policy by labelling all sex workers as problematic.  All this does is create an even bigger problem by not addressing the actual behaviour, on a case-by-case basis, as you would with any other guest.  I suspect that there is an irrational fear of legal sex workers which has resulted in whorephobia.

In conclusion, although these articles frustrate and annoy me for there poor reporting, they are useful for highlighting what the actual issues are.  Gender discrimination, sex worker discrimination and sexism.  They encourage debate, and in my opinion any debate is better than complete denial of the issues.  It is clear in the article in question, that Kerri-Anne Mesner has not really thought about what the real story here is.  She has missed her opportunity to really make a journalistic impression on those of us with learned intelligence.

It is about time the media took some pride in their stories and did Australians a service instead of slapping us in the face with bigotry.  Kerri-Anne Mesner could be forgiven for taking the easy road, but in this instance the implications of her negligence on the community is too great.  It is important that Australians are educated about facts about sex work, sex workers and the law.  Only then will the general public be fully informed about the pro’s and con’s of all aspects of the sex industry.  It is simply an injustice to write about moralistic assumptions based on what a small group of hostile hoteliers are saying without hearing what key experts have to say on the real issues.

I am carefully considering making formal complaints about media articles like this that discriminate in their own words.  It is about time we take a stand and insisted that journalists are university educated and supervised before their stories can be published.  Australia needs information to be based on fact rather than speculation.  Anything less, is nothing more than bullshit.  Jx